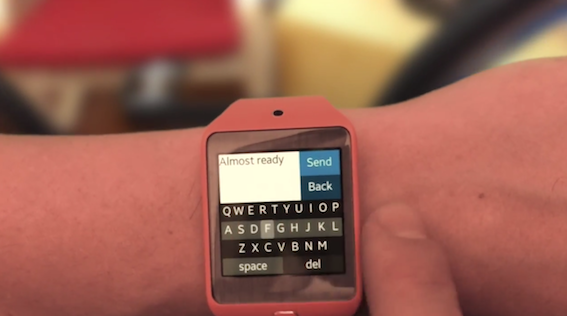 It might seem impossible to type on a smartwatch, considering the miniature size of the screen, but Fleksy is not giving up on the challenge. The team has launched a new texting app called Fleksy Messenger for the Samsung Gear 2, bringing its algorithmic prediction technologies to the wrist. The standalone SMS app is built for Samsung’s Tizen platform, which powers the Gear 2, and syncs with a user’s Android smartphone for sending and receiving SMS messages…

Fleksy normally focuses specifically on keyboard software, like its upcoming third-party keyboard for iOS 8, so a full-fledged app is somewhat new territory for the company. Based on the above video, Fleksy Messenger actually seems to do a respectable job at translating “dlmodt trsfy” into “almost ready” as the user quickly types and makes swiping gestures across the keyboard. If it works as good as advertised, Fleksy Messenger could make typing on a 2-inch screen practical.

“When the first smartphones came out, many thought typing on glass would be impossible,” Fleksy co-founder and COO Ioannis Verdelis explained via email. “Fleksy’s next generation technology is now redefining the use case and capabilities of wearable technology, and we are hugely excited to be doing this with Samsung Gear 2.”

Fleksy Messenger is now available on the Samsung App Store.