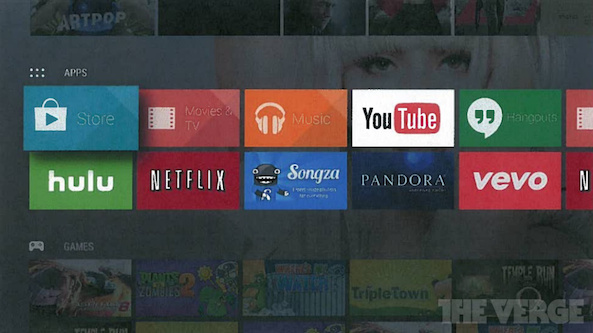 As smartphone and tablet penetration increases worldwide, tech companies are beginning to shift focus towards the home as their next area of interest. Apple executive Eddy Cue recently said that “the TV experience sucks” at the Code Conference, but it could be arch-rival Google that wins the war for your living room. According to Janko Roettgers for Gigaom, citing multiple sources familiar with Google’s plans, the company will announce the launch of Android TV at its Google I/O developer conference in June.

The report claims that Android TV will not be a standalone device, but rather a platform that TV and set-top box manufacturers can integrate into their products to bring streaming service and Android-based video games to the big screen. Google has been talking with major video app providers to attract them to Android TV, and it is expected that Netflix and Hulu Plus will be among the services available at launch. A few hardware partners could also have devices running Android TV available in the months ahead… 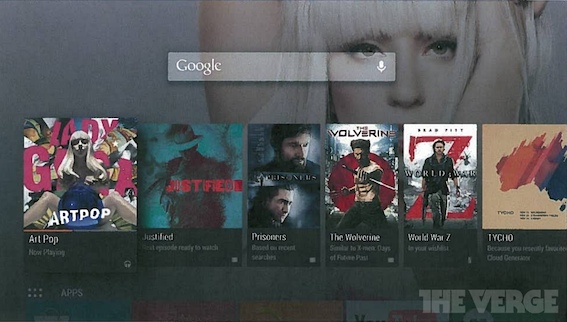 Android TV will have a simplistic user interface based on a card-like design that Google has codenamed Pano. Roettgers explained how this will work:

The idea behind Pano is that apps can surface individual pieces of content right on the home screen in a card-like fashion so that users can browse movies, TV shows and other types of media as soon as they turn on an Android TV.

Content will be presented in a series of cards that can be browsed horizontally, and each movie or TV show episode has deep links into publisher’s apps, giving users the option to start playback right away.

Pano will focus on content and gaming instead of apps, much to the chagrin of app publishers. The mocked-up screenshots in this article come from internal Google documents leaked by The Verge, revealing the card-like interface that is said to resemble Apple TV, Amazon Fire TV and Roku. “Android TV is an entertainment interface, not a computing platform,” wrote Google. “It’s all about finding and enjoying content with the least amount of friction.” It will be “cinematic, fun, fluid, and fast.”

Android TV will have support for voice input and notifications, although it recommends that developers use these features on a limited basis. The software platform will have an emphasis on recommending content to you, and will be able to automatically resume TV shows or movies that you started watching on a smartphone or tablet. The underlying objective for Google is to make access to content “simple and magical,” as revealed in the internal documents. 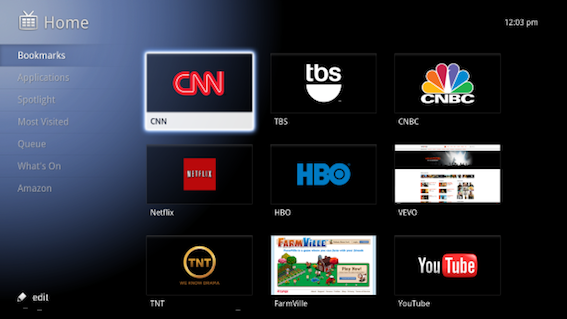 This is not the first foray that Google has made into the living room. It previously launched a similar smart TV platform called Google TV in October 2010, although sales through its hardware partners were limited. Google then followed up with its highly successful Chromecast dongle, which allows users to stream content over Wi-Fi or a local network using Chromecast-enabled mobile or web apps. Google executives have reported that the streaming stick has sold in the millions of units.

So, why does Google need another platform? Simple. While the Chromecast is affordably priced, it has limited hardware that places limitations on things like gaming. By releasing a platform that can run on more powerful devices capable of running full Android apps, the company can attract casual gamers that would prefer to play smartphone and tablet style games in lieu of spending $500 or more for a next-generation console like the PlayStation 4 or Xbox One.

The biggest challenge for Google will be gaining the support of electronics manufacturers, especially following the disappointment that was Google TV. Chromecast might have regained some of that lost confidence, however, so Android TV could still be a success. Sony and Vizio are among the TV makers that could be part of the Android TV launch announcement at Google I/O, while LG is unlikely to participate now that it has its own webOS-based platform.

Are you looking forward to Android TV?