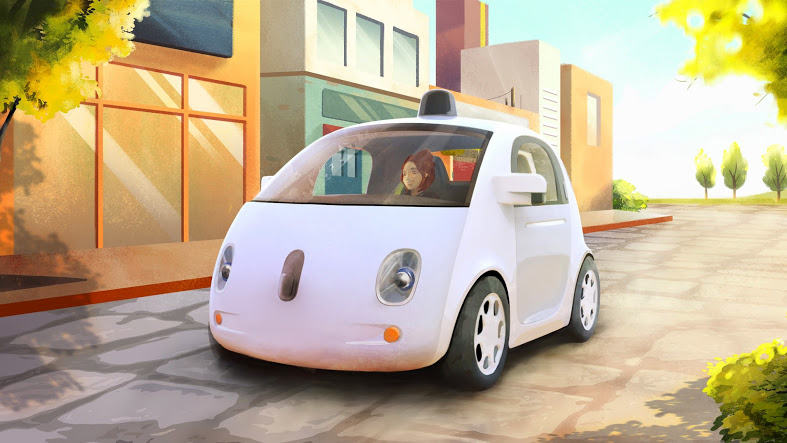 I remember when I was a kid, we all thought that by the year 2000, cars would be flying. Well, this is 2014 and although cars aren’t flying yet, they are starting to drive around on their own, no driver needed. That is the project that Google has been working on for several years and finally unveiled yesterday to the public.

The prototypes are small round cars that I must say look pretty cute. They are devoid of steering wheel, accelerator and brake pedal, because they don’t need any of these. If anything, it barely needs a human to tell it where to go.

The technology behind this is quite brilliant. The car constantly scans its direct environment and makes decision based on the data it gets. If it sees a school traffic person holding a stop sign, it will stop. If it sees a dog running across the street, it will slow down and come to a stop if needed. It’s basically constantly scanning what’s happening around.

Google says their system has been trained to recognize hundreds of different signals, such as a cyclist holding his hand to warn he’s about to turn. Unlike a human, the car cannot be distracted or tired. It just keeps going and scanning the surroundings and makes hundreds of decisions based on these surroundings.

It was inspiring to start with a blank sheet of paper and ask, “What should be different about this kind of vehicle?” We started with the most important thing: safety. They have sensors that remove blind spots, and they can detect objects out to a distance of more than two football fields in all directions, which is especially helpful on busy streets with lots of intersections. And we’ve capped the speed of these first vehicles at 25 mph. On the inside, we’ve designed for learning, not luxury, so we’re light on creature comforts, but we’ll have two seats (with seatbelts), a space for passengers’ belongings, buttons to start and stop, and a screen that shows the route—and that’s about it.

Google is hoping to build a hundred prototype vehicles and start a pilot program in California within a couple years.